MUH88E Kit is a professional 4K HDBaseT Home Distribution Hub Kit which consists of a 4K HDBaseT Matrix Switcher, 7 HDBaseT Receivers and accessories. MUH88E is a professional 8 × 8 HDBaseT Matrix Switcher that consists of the following inputs and outputs: 8 x HDMI IN (4kx2K@60Hz signal at max), 7 IR IN, 1 IR EYE, 8 x IR OUT, 1 IR OUT ALL, 7 x HDBaseT OUT, 1 HDMI OUT, 1 SPDIF OUT, 1 L&R RCA OUT, TCP/IP and, an RS232 control port via phoenix connector. The TPHD-BYE-R is an HDBaseT Receiver that consists of the following inputs and outputs: 1 HDBaseT IN, 1 IR IN, 1 IR OUT and HDMI OUT. The receiver is powered directly by the Matrix Switcher. All HDMI inputs can be selected either via the front panel buttons, IR, RS232 or GUI. The selected source is delivered to HDBaseT zoned outputs 1 through 7 and HDMI Output. The Matrix Switcher is capable of delivering 4K signals up to 40m (131ft), 1080p up to 70m (230ft), and powering the receivers via a single CAT6 cable. The Matrix Switcher supports EDID management and is HDCP 2.2 and HDCP 1.4 compliant. Audio sources can be selected via RS232 commands and TCP/IP at the Matrix Switcher or by 3rd Party control. 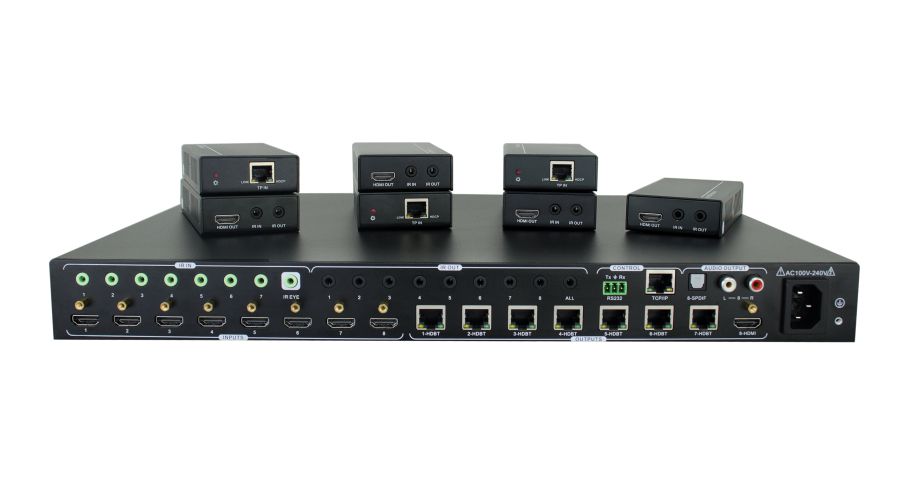 A – It is an eight HDMI input by seven HDBaseT and a single HDMI output 4K Matrix Switcher.

3) Q – What distance can the image be sent via the CAT cable?

4) Q – Will CAT5e be sufficient for the HDBaseT?

A – No, CAT6 and above is recommended.

A – The unit is controllable via the front panel buttons, RS232, IR, and TCP/IP.

We use cookies on our website to give you the most relevant experience by remembering your preferences and repeat visits. By clicking “Accept”, you consent to the use of ALL the cookies.
Do not sell my personal information.
Cookie SettingsAccept
Manage consent

This website uses cookies to improve your experience while you navigate through the website. Out of these, the cookies that are categorized as necessary are stored on your browser as they are essential for the working of basic functionalities of the website. We also use third-party cookies that help us analyze and understand how you use this website. These cookies will be stored in your browser only with your consent. You also have the option to opt-out of these cookies. But opting out of some of these cookies may affect your browsing experience.
Necessary Always Enabled
Necessary cookies are absolutely essential for the website to function properly. These cookies ensure basic functionalities and security features of the website, anonymously.
Functional
Functional cookies help to perform certain functionalities like sharing the content of the website on social media platforms, collect feedbacks, and other third-party features.
Performance
Performance cookies are used to understand and analyze the key performance indexes of the website which helps in delivering a better user experience for the visitors.
Analytics
Analytical cookies are used to understand how visitors interact with the website. These cookies help provide information on metrics the number of visitors, bounce rate, traffic source, etc.
Advertisement
Advertisement cookies are used to provide visitors with relevant ads and marketing campaigns. These cookies track visitors across websites and collect information to provide customized ads.
Others
Other uncategorized cookies are those that are being analyzed and have not been classified into a category as yet.
SAVE & ACCEPT